Comparison of Dobutamin and milrinone

The ideal inotropic agent should provoke stroke volume increase without augmenting myocardial oxygen consumption, have short half-life in order to be easily titratable, and not induce arrhythmias and tachyphylaxis.Unfortunately, such an agent does not exist. 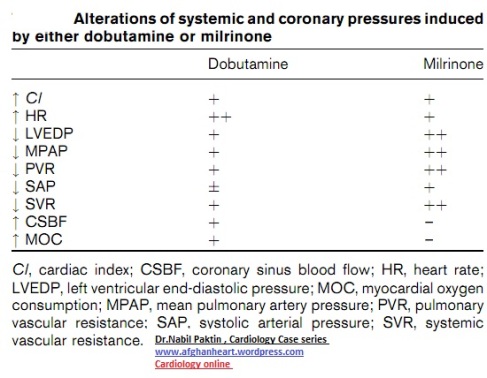 Cardiology online
Read rest of this article below

Regarding mechanisms of action, all inotropes improve cardiac contractility through different pathways. In most cases, these agents increase intracellular cyclic adenylate monophosphate (cAMP) levels, which in turn induce an augmentation in calcium release from the sarcoplasmatic reticulum, hence enhance the contractile force generation by the contractile apparatus. The cAMP increase is achieved by the beta-adrenergic-mediated stimulation ofadenylate cyclase, which induces cAMP production, in case of beta-agonists such as dobutamine, or by selective inhibition of phosphodiesterase (PDE) III, the enzyme that catalyzes the breakdown of cAMP in case of PDEinhibitors such as milrinone and enoximone. PDE inhibitors also provoke vasodilation through inhibiting vascular smooth muscle cells. It should be underlined that since their action is exerted distal to the beta-adrenergic receptor, PDE inhibitors maintain their effects during concomitant administration of beta-blocking agents .

Dobutamine and milrinone have similar hemodynamic effects, but also some potentially important differences.Those differences play an important role in everyday clinical decision-making about the inotropic agent of choice. Both lead to similar increases in cardiac output and decreases of ﬁlling pressures, although milrinone seems to have greater effect on lowering ﬁlling pressures than dobutamine. Milrinone has signiﬁcant vasodilatory effects leading to greater decreases of systemic blood pressure and systemic vascular resistance in comparison with dobutamine. Both agents can cause tachycardia but dobutamine provokes higher heart-rate states due to its direct action on beta-adrenergic receptors. Additionally, dobutamine seems to increase myocardial needs for oxygen to a greater extent than milrinone. The alterations of systemic and coronary pressures induced by eitherdobutamine or milrinone are shown in Table above  .

Although in the ESCAPE-trial invasive monitoring is not recommended in routine use, pulmonary artery catheterization may distinguish not only the patient with a low output state who may gain beneﬁt from inotrope administration, but also the kind of inotropic agent that is suitable for every different state .

In conclusion, milrinone is less indicated in clinical states characterized by hypotension or renal insufﬁciency compared with dobutamine. On the contrary, milrinone is preferred if the use of beta-blocking agents is necessary or in cases of increased pulmonary artery pressures.

Elevation of pulmonary artery pressure is a great issue in patients listed for cardiac transplantation since it is a strong relative contraindication to transplantation. Milrinone must be administrated cautiously in patients  with renal failure as it has a relatively long half-life (4–6 h) and is renally cleared. An initial dose of 0.125 mg/kg per min without bolus infusion is recommended as hypotensive effect may be blunted.

Posted on March 1, 2013, in Uncategorized. Bookmark the permalink. Leave a comment.