An Answer to ECG Case Challenge !!!

4- posterior subepicardial injury.
5- all could be possible
6- none .

The ST-depression in V1 and V2 can be reciprocal change, represent anterior subendocardial injury; OR (as is the case here) posterior subepicardial injury.

In the setting of inferior wall MI (IMI), the ST segment depression seen in Leads V1 and V2 in this patient’s ECG can be merely reciprocal or…

Is there posterior wall injury too?

Just By one move you can diagnosis it easily , turn it upside-down and see the left image as a STEMI , but this time , the anterior leads can act as a mirror of posterior aspect of heart , because in standard 12-leads ECG there is not specific lead for Posterior wall of heart . its similarly the dark side of the Moon .

The term PMI is used for necrosis of the dorsal, infraatrial part of the left ventricle located beneath the atrioventricular sulcus. The majority of patients with the typical electrocardiographic abnormalities for PMI have a stenosis or occlusion of the RCX. Some patients have a stenosis or occlusion of the RCA. In 10% of the population the RCX is the dominant vessel. It is the least commonly infarcted coronary artery. PMI has been reported to represent 15 to 21% of acute MI, often accompanied by inferior and/or lateral MI. A strict and true PMI is thought to be very rare; however, a more recent study showed an incidence of 3.3% using posterior leads. Risk factors, clinical presentation and differential diagnosis are no different than with other myocardial infarctions. 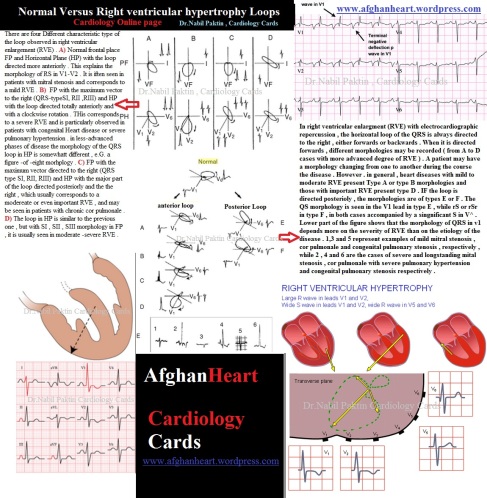 The differentiation of posterobasal myocardial infarction (PMI) from either right ventricular hypertrophy (RVH) or normal subjects displaying an anterior loop (AL) by electrocardiography (ECG) or vectorcardiography (VCG) is difficult.

The presence of a prominent R wave  in the right precordial leads of the ECG frequently creates a clinical dilemma. In the adult a distorted anteriorly directed vector may occur in posterobasal infarction as a result of loss of posterior forces, in right ventricular hypertrophy as a result of increased anterior forces and in at least 20% of normal in- dividuals.

. criteria for diagnosing posterior Myocardial infarction ;
1- *An R wave duration of 0.04 s in leads v1 and v2 with upright T wave and in the acute phase ST-segment depression .

8- No pathologic Q wave in the standard 12-leads ECG , unless diaphragmatic or lateral infarction coexists .

9- A Q wave duration of 0.04 s in an area posteriorly between the spine and the left scapula .

10- *Slurring of the descending limb of the R wave in lead V1.

Posted on August 15, 2013, in Uncategorized. Bookmark the permalink. Leave a comment.