← Answer to the Case Challenge! Where is the Culprit artery ? What is your mind just Through this ECG and Clinical Scenario?
Acute Anterior and Posterior wall MI at the same time ! Answer to an interesting case Challenge ! →

There are many similarities between atrial fibrillation and atrial flutter, there are also significant differences.Atrial flutter is an abnormality of conduction within the atria and, as with AF, the ventricles work normally.The causes and symptoms are also very similar to AF, as is the treatment, although the symptoms tend to be less severe and there is less risk of embolisation (clot formation). Atrial Flutter also tends to revert back to sinus rhythm spontaneously in some cases. 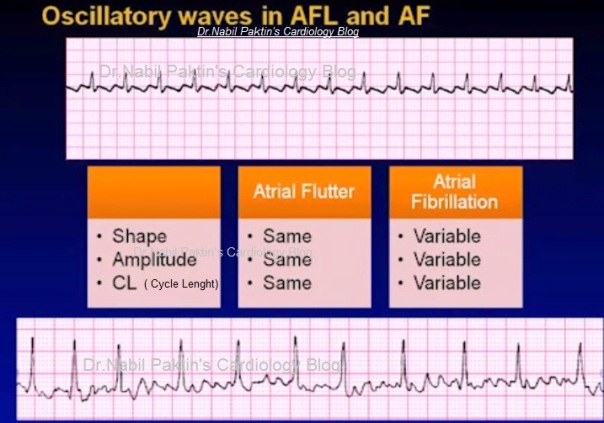 Unlike AF, atrial flutter emanates from a small group of ectopics, or a single ectopic focus within the atria. The sequence of electrical impulses tends to be more regular than in AF. The AV node, (as in AF), still acts as a “gatekeeper” and only conducts every second or third impulse due to the refractory period. 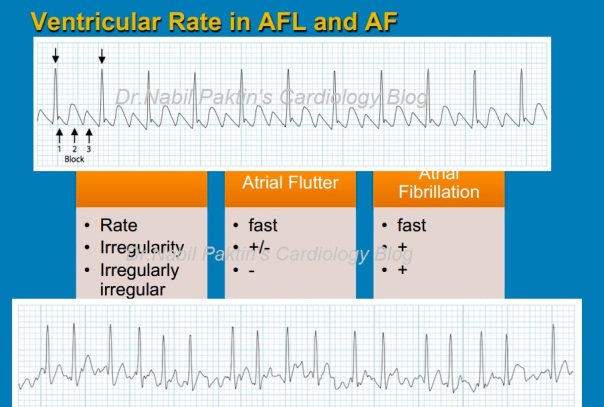 If you have difficulty understanding the refractory period, think of the AV node as the barrier at the entrance to a car park. Every time a car enters the car park, the barrier falls for a brief period before allowing the next car through. Therefore, any car that arrives at the barrier whilst it is down is blocked from entering.
The heart tends to flutter at around 300 per minute. Like AF, these flutter waves bombard the AV node but in a much more organised and regular fashion.
The flutter waves are also more well defined than fibrillatory waves and tend to look like the teeth of a saw (for cutting wood). Often referred to as a “saw-tooth” pattern.

Posted on February 2, 2015, in Uncategorized. Bookmark the permalink. Leave a comment.

← Answer to the Case Challenge! Where is the Culprit artery ? What is your mind just Through this ECG and Clinical Scenario?
Acute Anterior and Posterior wall MI at the same time ! Answer to an interesting case Challenge ! →